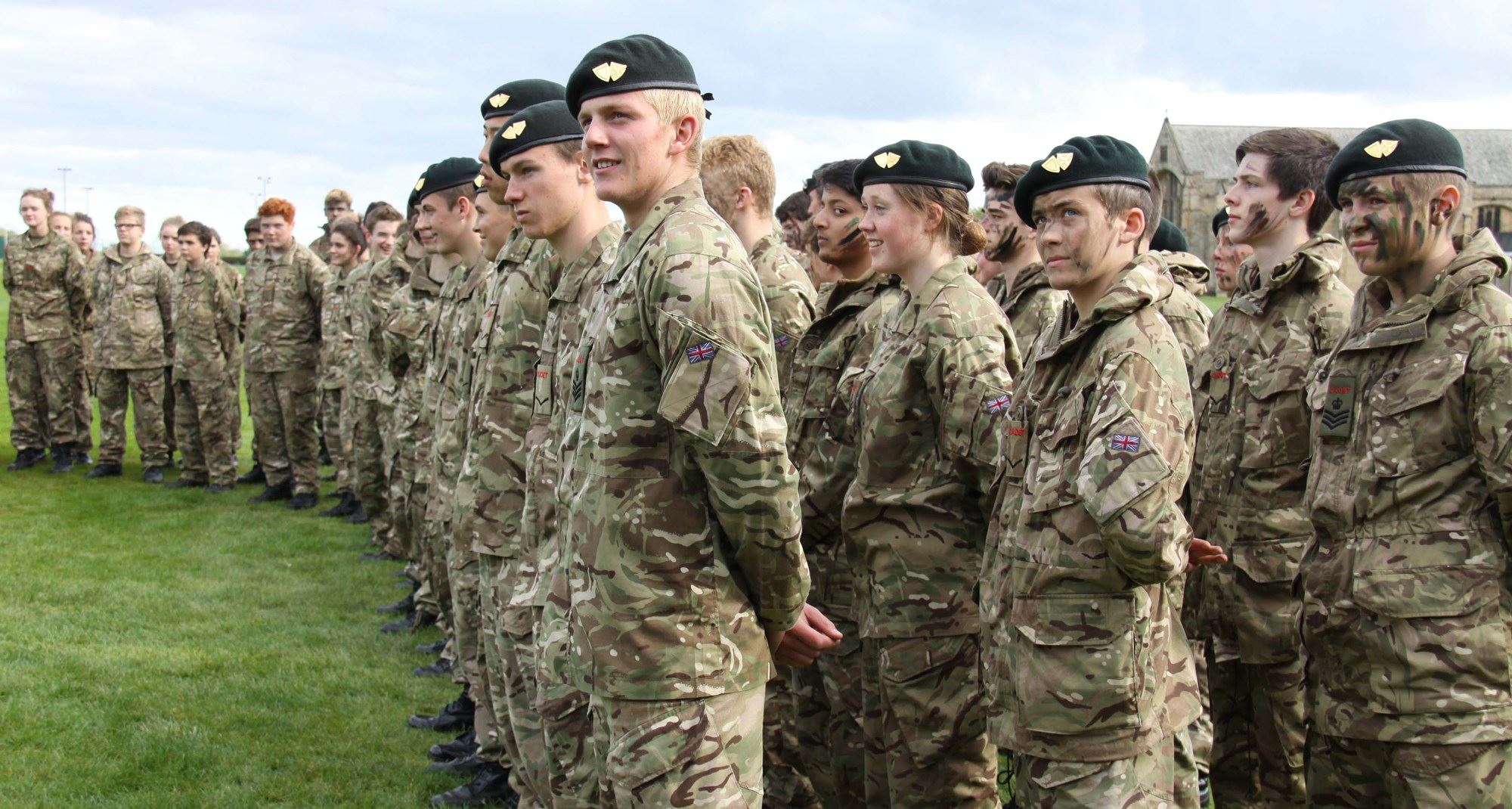 With roots stretching back to the establishment of an Officer Training Corps at school in 1909, the Combined Cadet Force has grown into one of the biggest school units in the country and one of the most popular organisations for Senior School pupils. Participation in our Army or RAF sections is completely voluntary but is thoroughly rewarding and immense fun.

CCF is a partnership between schools and the Ministry of Defence. The CCF at Barney is affiliated to the Rifles Regiment. Drawing on aspects of military training such as first aid, navigation, marksmanship and drill, we aim to help pupils develop as young leaders and to promote qualities of teamwork, discipline, initiative, responsibility, self-reliance, resourcefulness, endurance and perseverance. The range of opportunities in which cadets can take part includes climbing, flying, gliding, camping, orienteering, canoeing, small bore and full bore shooting, mountaineering and adventure training. The CCF can also help cadets achieve the required standards to complete the Duke of Edinburgh Award. The school has its own indoor rifle range and safe marksmanship is practised each week with qualified coaches and range staff.

All of our CCF officers are members of the school staff so our children already know them well and have developed good relationships with them. We also receive support from the cadet training teams of the regular Forces and are able to use service facilities for camps, training weekends, visits and courses. Cadets from another local school are affiliated to us who attend field days and camps with us.

The contingent strength varies with the size of the year’s intake, but is usually between 150 and 180 cadets. New pupils join in the Trinity Term of Year 9 and are expected to fulfil their commitment to the CCF until the end of Year 11. In Year 9 cadets work together and then split into either Army or RAF sections as they enter Year 10. After Year 11 pupils can choose to leave or to stay and help run the programme as NCOs. Sixth Form cadets can opt to work towards a CVQO BTEC level 2 qualification in teamwork and personal development.

Army
The school’s CCF Army section is the most popular with 60-80 new students choosing to join each year. New cadets complete their basic training before heading out on Exercise First Look, which is a 24-hour basic field-craft exercise. During Trinity Term, the new recruits are also taught the history of the CCF including our affiliation with the Rifles Regiment, the rank structure and basic drill, which concludes with a drill and turnout competition.

In Years 10 and 11, cadets following the Army Proficiency Syllabus, which includes lessons in skill at arms, basic and advanced map reading, basic and advanced first aid, leadership and development, advanced field-craft, including duties of a sentry, patrolling formations, section attacks and ambush drills. Cadets in Year 11 also follow a Methods of Instruction Cadre, which allows them to teach the younger members of the CCF.

Cadets are promoted throughout their career in the army section. On promotion to NCO, cadets have many opportunities to practise their leadership and development skills as they deliver lessons to the cadets each week.

As well as weekly parade nights, the Army section also offers a number of field days and camps at weekends and during holidays. Year 10 cadets complete a skill at arms field day and Exercise Second Look, which prepares them for annual camp and adventure training camp. Our popular camps allow the cadets to test themselves both physically and mentally as they take on challenges, develop new skills and a spirit of adventure.

Cadets also benefit from presentations from military units throughout the year as well as taking part in a number of brigade competitions, including Exercise Black Rat Challenge, the cadet SAAM, the Jarvis Cup and Surtees Shield.

RAF
The RAF section runs alongside the Army section under the CCF umbrella. It offers similar training to the Army syllabus with the additional opportunities of learning to fly and glide. Our contingent is very fortunate to have nearby flying facilities at RAF Leeming.

The RAF section typically numbers about 30 cadets many of whom take advantage of opportunities to canoe, climb, abseil, mountain bike, mountaineer and parachute. As well as flying, a knowledge of aviation, navigation, airmanship, first aid, communications, camp craft, marksmanship and field craft are all encompassed within the RAF section’s training.

Year 10 cadets in the first term learn to use the GP weapon safely then go on to learn first aid, map-reading and the basics of the RAF. Year 11 cadets undergo leadership training and then learn specialised modules on principles of flight, airmanship and basic navigation. Sixth Form pupils are offered the chance to complete advanced modules in aircraft navigation and to become qualified instructors.

Cadets can also take advantage of the many courses run by the RAF such as gliding scholarships, the Air Cadet Pilot Navigation Course and the Air Cadet Leadership Course at the RAF College Cranwell. Certificates can be gained in Flying Scholarships and International Air Cadet Exchange.

“Strength of character came through the combination of things we did at Barney, including playing rugby and public speaking and the school operates in a way which teaches its pupils to be decent people, with a sense of responsibility. I meet a lot of young adults who haven’t learnt basic, practical life skills, the skills which give people a sense of independence. The CCF helps young people achieve many of these things.” Captain Edward Challis, OB