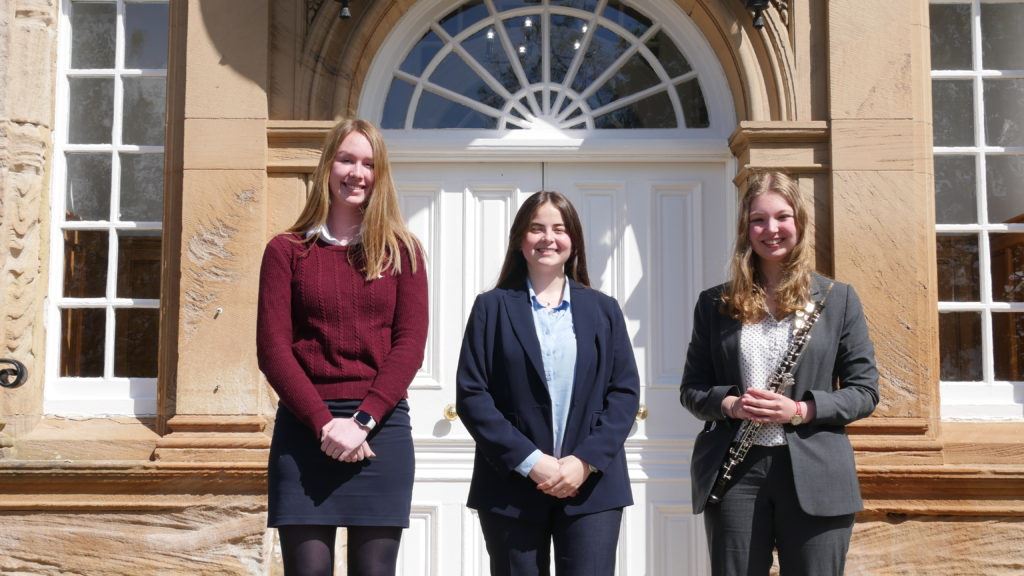 Upper Sixth student Evie and Year 11 pupil Lois were awarded first place in the Instrumental and Singing categories, respectively, at the North East Rotary Young Musician of the Year Competition (YMOTY), while fellow Year 11 student Anna has secured a place at Samling Academy.

The awards for Evie and Lois follow their success at the recent Barnard Castle Rotary YMOTY, when Evie took home the Best Overall Instrumentalist Award and Patricia Hartness Prize, and Lois was recognised as Best Overall Singer.

After impressing at the audition stage, Anna will attend the prestigious Samling Academy in the summer, where she will join other talented, young classical singers from across the region and receive intensive masterclass weeks under the care of world-renowned opera singers, song specialists, accompanists, coaches and actors.

Barney’s Head of Choir, Evie, has played the oboe for seven years, achieving her ARSM diploma with distinction when she was 15. She is principal oboist of the Tees Valley Youth Orchestra, which, in 2019, toured to New York where they gave a full-length concert in Carnegie Hall.

She said: “I’ve been involved with the Rotary Young Musician of the Year competitions for a few years and it was brilliant to see such a fantastic uptake from the community in and around Barney for this year’s competition, with our district the only one in the country to manage to hold the event this year.

“Being a musician over the last year has been really tough, with countless rehearsals and concerts cancelled: the very lifeblood of music-making as a social activity disappeared.

“Events such as this one make all the difference in our lives as young musicians and winning the Patricia Hartness trophy at club level, followed by my district level success was a wonderful way to see out my years of participation in the competition.”

Anna has always had a passion for music, especially classical, having taken singing lessons at a young age and, most recently, been involved with Barney’s Chapel Choir and the School’s recent ‘Concert for Kenya’ fundraiser.

Over the last year, she has learnt to play the clarinet and, since the return to School in March, has taken organ lessons, expanding her music portfolio.

Anna said: “Earlier this year, due to Coronavirus situation, I found myself with much more free time so I decided to seize the opportunity to leap back into the musical world and rediscover my love for playing and singing.

“I am excited to have the opportunity to develop my voice further and perform in concerts with Samling Academy, and most importantly to be with other people who share the same interest and passion for music as I do.”

In addition to her musical talents, Lois features heavily in Barney’s senior drama productions, having appeared in the School’s most recent performance of Made in Dagenham, in March 2020.

She said: “The opportunity that YMOTY provides for people to do what they love, especially in Covid-times, is amazing. Everything has been thrown out of kilter for the past year, so being able to perform in some way was wonderful.”

Richard Dawson, Barney’s Director of Music, added: “I am thrilled for Evie, Lois and Anna, who are all extremely talented musicians with bright futures ahead of them.

“Despite the challenges brought about by COVID and the significant impact that restrictions have had on the arts, they haven’t let this affect them, which is testament to our pupils’ character and resilience.

“These latest achievements are fully-deserved and should hopefully act as a catalyst for future musical success at Barney.”