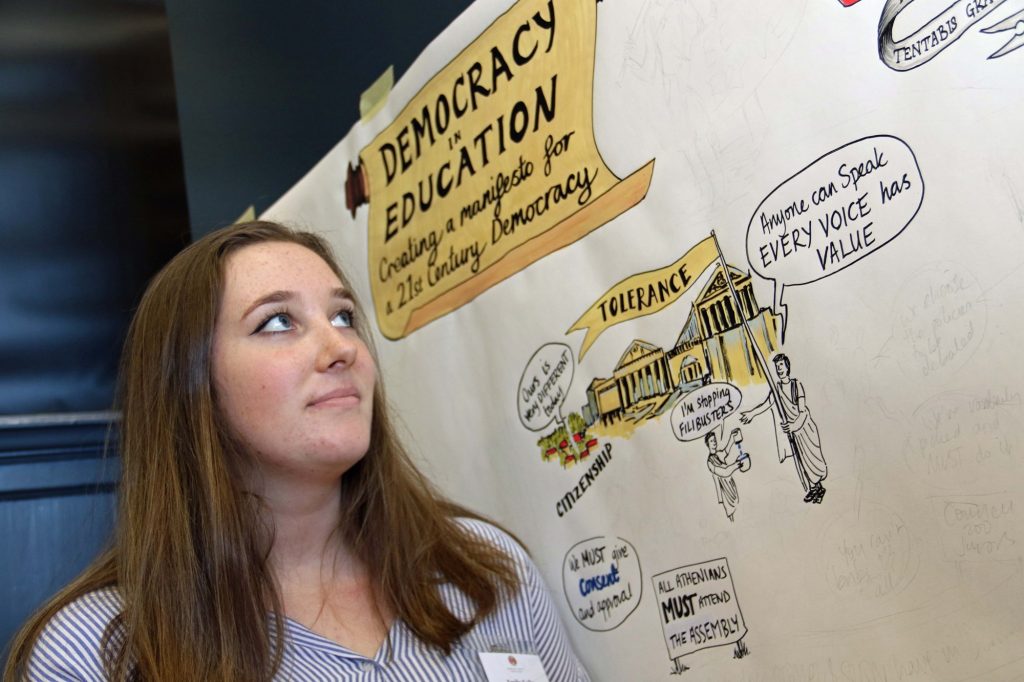 This week, we welcomed students from across the Tees Valley as we hosted the Royal Society for the encouragement of Arts, Manufactures and Commerce (RSA) Democracy in Education Programme launch event.

Around 70 of the brightest young minds from state and independent schools across the North descended on Barney for the day as teams developed a raft of ideas and a 90 second video that could be taken back to their peers with the theme “a Manifesto for a 21st Century Democracy”.

Those in attendance heard from various speakers on democracy, including a video call from Adam Cronkright, author of Putting Everyday Democracy into Practice, who works with students in Bolivia, America and Canada developing democratic thinking, and filmmaker Sophie Wardle who offered advice on scripting, shooting and editing their video.

RSA CEO Matthew Taylor, a former chief advisor on political strategy to the Prime Minister, was among the visitors to Barney, who said: “We are more pessimistic about the future than ever before and if this carries on we are in big trouble because we are becoming more amenable to authoritarianism.

“We do not trust our leaders now. We suspect that our politicians care more about their parties than the public, are unrepresentative and do not represent society as a whole. There is a large proportion of the population, bigger than you think, who just want to tear things down, who want chaos in society and if people are not part of the solution they can become part of the problem.”

Mr Taylor said: “We need to reform the system, we need to live a democratic life, to democratise education. Democracy is like a bicycle, if it doesn’t move forward it will topple.”

Mr Cresswell, Deputy Head and teacher in charge of Sixth Form at Barney, who is a fellow of the RSA after speaking at its annual meeting earlier this month, added: “We came up with the idea of this event and already we have had interest from schools from Bedford, Glasgow and Edinburgh.

“The aim was to come together as a community of problem-solvers, to draw out students’ ideas and turn them into action, to unite people and ideas to solve the challenges of our time and to create a world where everyone is able to participate in creating a better future.

“We need different types of answers and this was students’ chance to start a journey to become a changemaker.”

Students will now return to their schools to work on a democracy action plan which will be reviewed by the Tees Valley Sixth Form Democracy Council before presenting their experiences of the programme to RSA London.

Interested schools and colleges are invited to get in touch for information on future involvement in this project at democracyineducation@barneyschool.org.uk – whether through hosting events, joining current activity or engaging with the RSA and its network of Fellows.