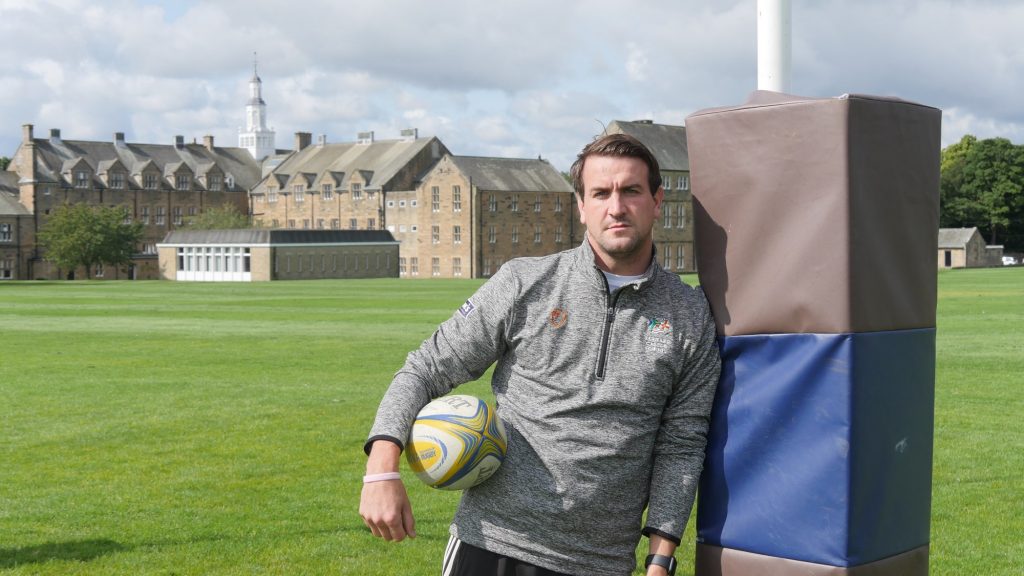 Barney return a ‘dream come true’ for Lee Dickson, following a successful career of proving his doubters wrong at the elite level

Lee Dickson, our new Master in Charge of Rugby, has big ambitions for Barney’s well-renowned programme, following a ‘crazy, enjoyable and tough’ 15-year career in the sport.

The former England international and one-time Premiership Rugby winner, returns to where ‘it all began’ as he prepares for his debut season armed with a wealth of experience and knowledge from his playing days.

“As soon as this opportunity came about, it was a no-brainer. This place is in my heart; I had the best time of my life here,” Lee explains.

“It is going to be an exciting season and a great building block. We recently had five members of the senior team turnout for the Newcastle Falcons U18s and have a couple of exciting prospects coming into the side.

“But, for me, it is about developing the younger generation of the school. I want my message to filter right through to the Prep School, so that the basics of rugby are instilled into the kids and they have fun with the sport.”

Lee is already settling well into life in the North, after retiring from the game at the start of 2019 – when he last played for Bedford Blues.

Having been schooled at Barney from age 11 to 18, Lee has a strong affinity with the region; he called Newcastle home for four seasons when he played for the Falcons before moving to Northampton in 2008, where he was part of Saints’ championship winning side in 2014.

He’d always dreamed of returning to where it all started, though. A homecoming was something Lee didn’t think would ever happen, but it was something he’d always desired. He’d also wanted the opportunity for his three children – Josh, Oscar and Charlie – to experience their own Barney journeys, following in their Dad’s footsteps.

He said: “Deep down in my heart, I wanted my kids to go to Barney. The school didn’t just give me rugby, it gave me a grounding in everything.

“I didn’t think it would happen, though, as we were happily settled down south. Then the call came out of the blue and my wife, Becky, was completely understanding and open to the idea as she knew it was my dream.”

The role will be much more than teaching the fundamentals of rugby to youngsters and honing their raw talent for Lee, though.

“My ambition is to create ‘C’ team rugby out of the school,” he explains.

“It is great that we have strong A and B sides, but rugby brings a lot out of people and I feel that every kid should want to play it and for it not to be forced. Gone are the days when people are shouting and screaming at each other; it has to be fun. I want them to go out there, be a free spirit and enjoy their rugby.

“It isn’t just our students’ playing ability and physical nature, it’s their attitude towards rugby. They all have a great deal of respect and are well mannered, which is very important to the school and the sport as a whole.

“Even if they are not going to be a world-class rugby player, what rugby instils into people is friendship and a bond that allows you to express yourself. It is sort of like a brotherhood.

“I will have done my job when, after students are sent on their way after Sixth Form, they still love playing the game of rugby.”

Barney had a massive impact on Lee’s future career, especially one of its teachers, who is now Lee’s colleague – Martin Pepper, another former professional rugby player and Barney’s current Second Master.

“Martin is Barnard Castle School. He also came from a professional environment and has really revolutionised the rugby programme at Barney,” Lee said.

“He was always there to talk to you and someone who offered advice and tough love, but also put his arm around you when you needed it. When people think of rugby players, they think ‘tough guys’, but we are humans and the way Martin goes about his business to this day and his approach to rugby has rubbed off on me.

Since 2004, rugby has been Lee’s job, but something that may not have even been possible, had he listened to one coach, who told him he wasn’t good enough to play the game at the highest level.

“I had to really work hard and prove a lot of people wrong. I was told when I was 18 that I wasn’t good enough to play, which gave me the motivation to go on,” he explains.

“A former coach of mine, John Fletcher, along with Martin, instilled belief into me to just go and have a crack at it.

“Rugby gave me everything. If you would have said to me when I left Barney at 18 that I’d achieve everything that I have done throughout my career, I’d have bitten your hand off! There’s been a lot of hard work, a lot of sacrifice, but I thoroughly enjoyed it all along the way.”

Representing England was always a special moment for Lee and one of his proudest memories was making his international debut against Scotland in 2012, but, rather surprisingly, it wasn’t his proudest career moment.

“Definitely making it (as a professional rugby player) and proving people wrong,” he said.

“Playing for England is the pinnacle of everything and making my debut for the national team was a very proud moment of my life.

“I always wondered whether it was going to happen as I progressed quite late at the ages of 24/25. Stuart Lancaster gave me my shot and I’m forever grateful to him, and hopefully I repaid his faith in me.

“Making it as a rugby player was the proudest, though.

“At 17/18, I could have easily gone in another direction. I wasn’t a superstar, but worked incredibly hard; I wasn’t like my best mate Matthew Tait, for example, who achieved what he achieved because he is a phenomenal rugby player.”

Lee will also be keeping a watchful eye on England’s progress in Japan next month.

“We’ll get out the groups then it is knockout rugby where anything can happen. I think he’s (Eddie Jones) picked a great squad with great balance and people who are in form, other than maybe one or two.

“Eddie Jones has a fantastic track record of being an unbelievable coach and a great one in world cups, so I have all the belief in the world.”

Much like his belief in Eddie Jones’ England side, Lee Dickson has a very strong belief that Barney can start challenging for Schools Cups in the not too distant future.