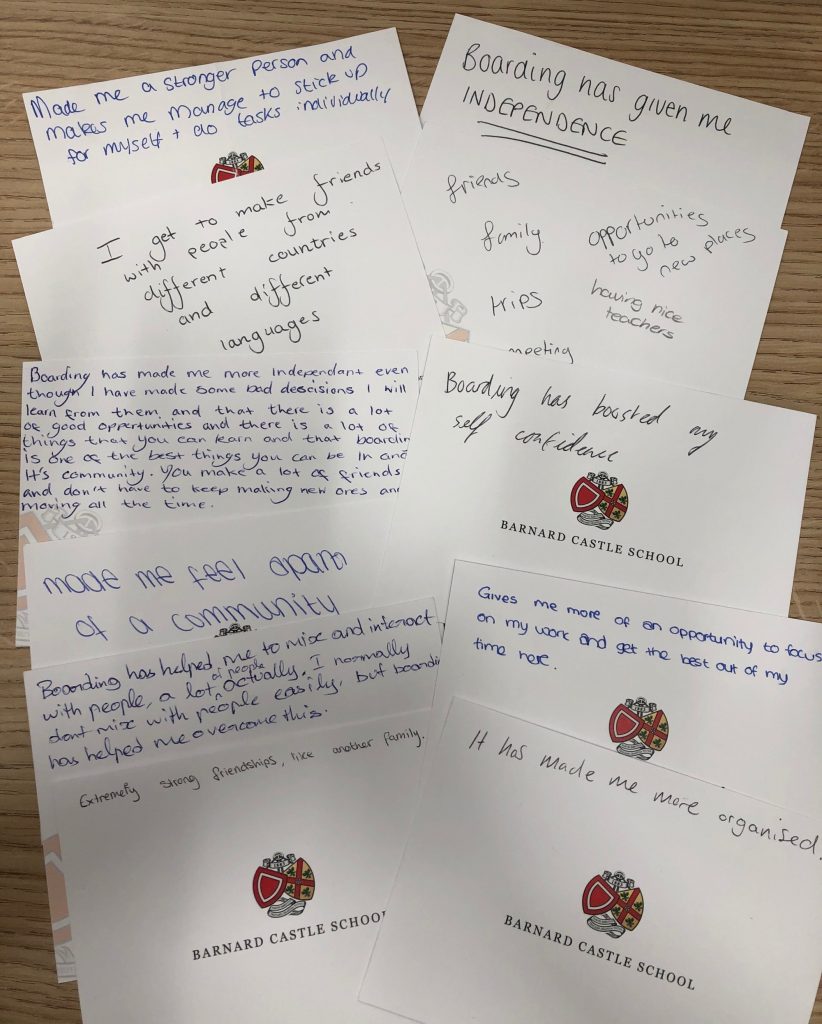 Last week Barney celebrated National Boarding Week, an initiative established by the Boarding Schools Association, which looks after the 500 plus Boarding Schools in the UK. The Boarding community held a series of exciting events to celebrate our Boarding community and the wonderful opportunities boarding provides. It was a great opportunity for all pupils to learn more about Boarding at Barney in assemblies and by talking to their friends and the staff that make up our Boarding Houses: Northumberland, York, Longfield and Old Courts.

The week began with Northumberland and York Houses’ Fathers’ Day service and lunch, during which James Dodds gave a moving speech about his time at Barney and how it has shaped the person he has become as he moves onto pastures new in September. The afternoon saw the hotly contested Lads v Dads Cricket match, won this year by the Dads! On Monday Mr Jackson, a former Housemaster himself, gave an assembly to the whole school about life in Boarding, a theme that continued in Year Group assemblies throughout the week with Senior Pupils and new Head of Rugby, Mr Dickson, also talking about their time in Boarding. All the Boarders gathered in the Sixth Form Centre on Tuesday evening for our termly Boarders Communications Evening; an opportunity to provide us with feedback on their experience and suggest any improvements we could make. On Wednesday evening, Northumberland and York House played a T20 Cricket match for the Clouston Cup under beautiful blue skies, while the Junior Boarders enjoyed the sunshine out of on our fields. The Movies came to Barney on Thursday night as all Boarders gathered in the Boys’ House to watch The Goonies on the big screen with mountains of popcorn! Exeat weekend allowed a wonderful trip to sunny Scarborough, where pupils could experience Fish n Chips by the sea, sandcastle building and sticks of rock, before heading back to school for an evening BBQ in the sunshine. Finally, on Sunday we were delighted to hold a Meet and Greet event outside Old Courts for Junior Boarding parents, where Mr Edwards and Mr Joy, our new Boarding parents from September, hosted tea and cakes.

The week provided a wonderful snapshot of this dynamic part of Barney life and we were pleased to launch our new Twitter account @BarneyBoarding to document it. We were also delighted to welcome a number of day pupils into Boarding for taster nights too. Over the course of the seven days, all pupils donated part of the their tuck money for the Boarding Schools Association’s chosen charity, Barnardo’s.

If you are interested in Boarding at Barney, please do not hesitate to contact Jo Barkes, our Registrar, or one of our Boarding HSMs: Mr Monument (Northumberland and York), Mrs Burgess (Longfield) and Mr Edwards (Old Courts).