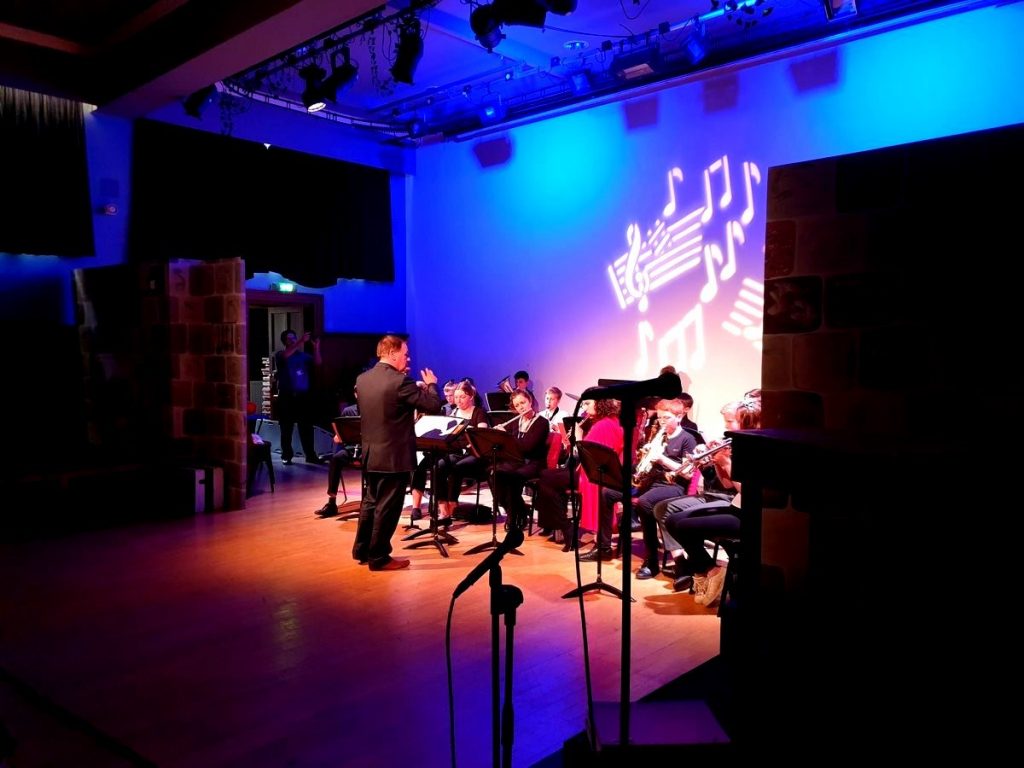 On Monday night, a collection of artwork, music and drama from Years 7-9 was showcased in this year’s Junior Arts Evening. Outside in Central Hall, there was displayed a range of different pieces or artwork; the Year 9 themes in art lessons for this year ranged from the theme of WW1 heroes from the school to Robert Delaunay’s art style. Also in Central Hall, before the performances in Big School began and in the interval, music from the Brass and Woodwind groups was played from the balcony.

The Glee Club performed three different musical theatre songs. The first was a twist on Chicago’s ‘Cell Block Tango’ that told the stories of various fictional characters, such as Matilda, Gavroche and Annie, rather than the original characters in Chicago. In the musical, ‘Cell Block Tango’ is a powerful dance routine that channels the characters’ anger and is a favourite to be performed in a new light by indie theatre groups or at school. The two other pieces were ‘Your Fault’, from the musical ‘Into the Woods’ and ‘Seasons of Love’ from ‘Rent’.

There was a variety of short sketches from Year 7 and 8, all of whom practised using comedy in drama and showcased the talented actors in the lower school. Huge effort was put into polishing these performances, from the cast of over 30 students who rehearsed in and out of school to Mrs Gorman and Ms Gorman, who spent time directing and perfecting the sketches. There were eight scenes in total, which included “Casual-ty” and “Twixt Heaven and Hell”.

The Junior Orchestra performed a number of brilliant pieces throughout the night, directed by Mr Donnelly. These included “Oh, When The Saints” and “Pomp and Circumstance”.

As well as group performances, there were a number of solo performances from different mediums of art; there were instrumental and vocal soloists as well as showcasing writing pieces. Bea Dolby and Hatty Whitburn read out their writing pieces, Bea’s being a creative writing piece about a forest and Hatty’s, a persuasive piece about why we should shop in person rather than online. Both were read and written beautifully, especially so considering how unnerving reading in front of an audience can be. On Sax, Ben Taylor and Tom Forster performed “Now’s the Time” and “One Way” likewise; Emma Hardy performed, on clarinet, “Dixie Land Blues”. Vocal performances came from Mathew Kerr, who gave a rendition of “Close Every Door” from Joseph; Charlie Appleyard, who sang and accompanied on keyboard, an original song called “Unbreakable”; Imogen Roff, who performed “I Dreamed A Dream” from Les Miserables; Grace Robinson, who performed “Never Enough” from The Greatest Showman; Izzy Kerr, who sang “Quiet” from Matilda and Lois Falshaw, who performed “A Better Version”, a song from a fairly unknown but painfully beautiful musical, 36 Questions.

Huge thanks to everyone who performed in the Junior Arts Evening, but also a huge thanks to the people who organised it and helped it run smoothly, despite the short time to rehearse in Big School owing to the Lower Sixth and Year 10. Mr Edwards, as always, played a great part in the organisation of the evening as well as rehearsing the Glee club pieces, while Mrs and Ms Gorman rehearsed with the Year 7 and 8 Drama Group and Mr Donnelly in charge of the Orchestra, Woodwind and Brass. The tech crew worked with the sound and lighting brilliantly with a small space of time to prepare and Mrs Rothwell, along with the Prop Making club, helped with the props for the drama sketches.