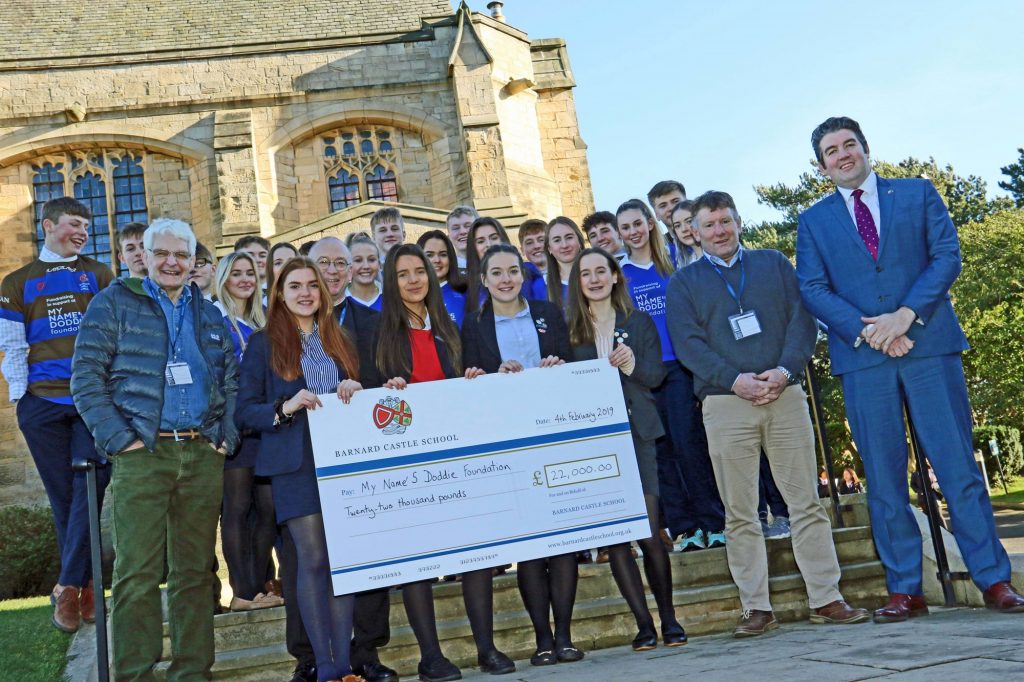 YOUNG fundraisers showed what can be achieved when they try after collecting a record £22,000 for a rugby player struck down by an incurable disease.
Barnard Castle School pupils and staff handed over the proceeds of a single term’s fundraising to the My Name’5 Doddie Foundation, a charity set up for former Newcastle Falcon and ex-Scottish and British Lion George ‘Doddie’ Weir, who has been diagnosed with motor neurone disease.

A muscle-wasting disease caused by the failure of neurons in the body to fire correctly, MND is currently incurable and results in all the body’s muscles shutting down.
Barnard Castle School Sixth Formers heard about Doddie’s plight and decided to help by organising a series of fundraisers which raised £22,000 for medical research.
Doddie, now 47, played lock and made 61 international appearances for the Scotland national team.

His best friends and team-mates, ex-Scotland captain Gary Armstrong and former Lions captain Finlay Calder, travelled to school to officially accept the cheque.
Ex-scrum-half Mr Armstrong said: “We have been all over the world collecting cheques but to come to a school which has raised £22,000 in such a short time is absolutely phenomenal. We can guarantee that every single penny will go into research to find a cure for MND.
“Doddie is our best mate and to see him now makes us feel hopeless because at the moment there is no cure and only one drug which slows down the effects slightly. Last year we spent £1.4m on research and another £1m is planned for this year. We also try to help by providing electric wheelchairs and chairlifts to make life more bearable.”
Headmaster Tony Jackson said: “Every year our students work tirelessly to support a variety of charities raising thousands of pounds for worthy causes. Last year we raised £14,000, so to raise £22,000 in just the first term is a staggering achievement for students and staff.
“The dinner and auction were incredibly well supported with guests travelling from all over the country and donating incredibly generously. Everyone at senior and prep school and our Old Barnardians really got behind the fundraising to amazing effect.”
Guests to the charity dinner included former British Lion John Bentley, who acted as auctioneer and master of ceremony, Rob Andrew, who is now chief executive of Surrey County Cricket Club but was RFU director and director of rugby at Newcastle Falcons and is an Old Barnardian, Newcastle Falcons director of rugby Dean Richards, Falcons’ Alex Tait and Tom Catterick, Bath forward Ross Batty and ex-England Falcons and Saints scrum-half Lee Dickson, who has just retired from Bedford Blues to become the school’s new master of rugby.