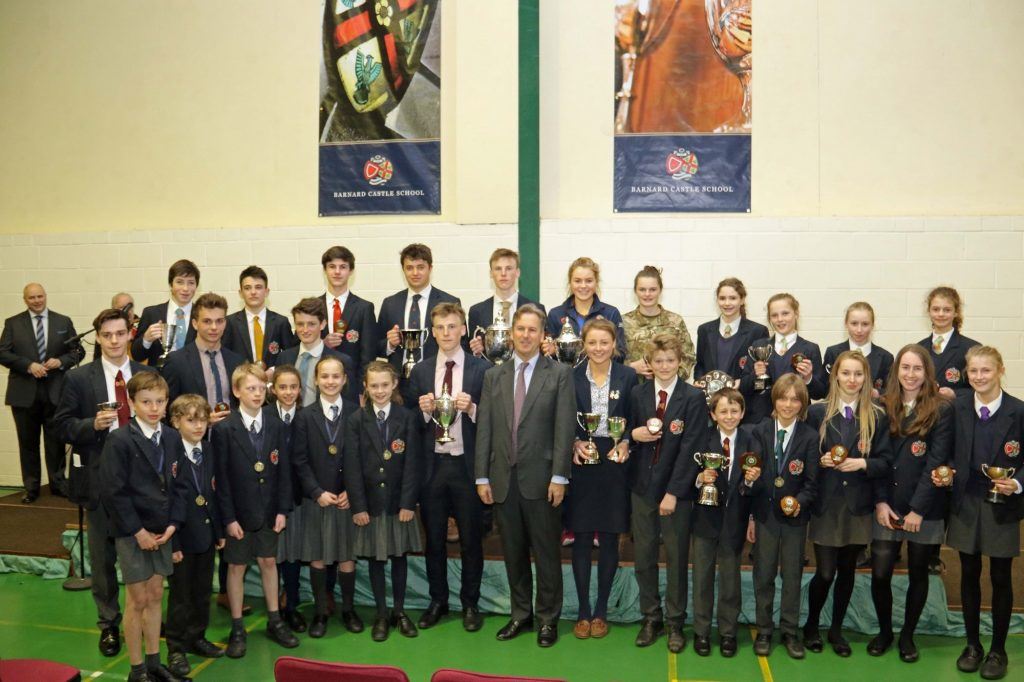 RUNNERS reflected on the past, celebrated the present and looked forward to the future as they ran an historic race under the watchful eye of the Lord whose family lent the Barnard Run its name.
Lord Barnard presented a host of trophies to students at Barnard Castle School who competed in the challenging event, which this year marked its 125th anniversary.
“In 1892 Barnard Castle was a happening place and when my great grandfather secured the title he was keen to be involved with all the good things in the area,” he said.
“This was the great new school of the North and that same spirit of endeavour and energy is still here and being expressed in the Barnard Run today.”
For the first time in the race’s history, Barnard Castle Preparatory School took part with a 24-strong elite event and a fun run involving the remaining 176 pupils.
The senior school races, involving 278 students, also followed a new route after the felling of a tree which had provided a landmark for generations.

Two new cups were awarded in memory of former students Alistair McCulloch and Alan Lumley.
Alistair’s parents Joy and Alan presented his trophy to the boys’ under 14 winner Frederick Langton.
Julia Lumley presented her brother’s trophy for the intermediate boys’ house winner. The proceeds of the Barney Bash qualifying races, expected to be around £5,000, will also be presented to the charity CRY – Cardiac Risk in the Young – in memory of Alan, who died last year on his 31st birthday after collapsing during a half marathon.
She said: “Thank you for supporting this charity. I don’t think Alan was too keen on the run because he was too slow but after he left school he really developed a passion for running.”
Race organiser Charles Alderson said: “This is an event which makes us all reflect on a brief moment of our lives and think of the students who have run it before, allowing us to tell a story, share a joke and shed a tear.”

Old Barnardian and world class Team GB triathlete Jacob Shannon took the honours in the old boys’ race completing the four-mile cross country run in just over 24 minutes.
The 20-year-old, of Middleton Tyas, near Richmond, who lives with haemophilia, represented his country in last year’s World Triathlon in Mexico, finishing fifth and will compete again this year in the Netherlands.
“It was great to be back at school which remains at the root of my sporting ambition,” said Jacob, who trains with Olympians the Brownlee brothers in Leeds.
First boy home in the senior race was Year 11 student Caleb Ellis, 16, of Dalton, Richmond.

The first girl home was Year 11 student Anna Everall, 15, of Barnard Castle.
Headmaster Alan Stevens said: “The Barnard Run has grown into such a significant occasion and every year we are able to add a little bit more to its esteemed history. We were delighted to welcome Lord Barnard to present the prizes.”