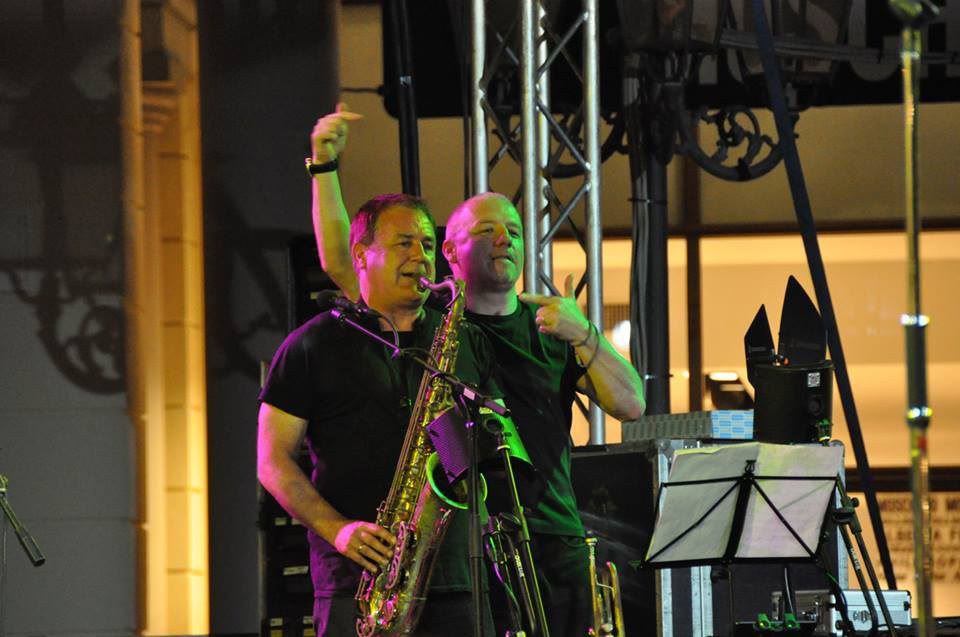 From humble beginnings in Hartlepool, saxophonist Mick Donnelly has played with stars including Whitney Houston, Britney Spears and Robbie Williams. We spoke to him as he prepared for a jazz concert to mark 21 years as a teacher of music at Barnard Castle School…

MICK Donnelly is in his office researching Tom and Jerry cartoons. “It’s for the music. I get the children to write about what they hear. It’s a great way of demonstrating how people listen to things differently. Tom and Jerry is a good one, but Pingu works well too,” he reveals.
It’s an interesting perspective on music in a career that has spanned punk, ska, 80s soul, 90s pop and some of the biggest selling songs of recent years. Mick has played saxophone on them all, in concerts, TV shows and in recording studios, his talent, versatility and reputation for getting on with people ensuring his longevity over 40 years.
For half of that time he has shared his experience and brilliance with pupils at Barnard Castle School, where this year he celebrates 21 years as bandmaster and teacher – he takes 22 one-to-one music lessons a week and teaches the whole of Year 7.

“It’s my job to enthuse them about music and to get them interested in participating. I like them to enjoy music and I like to think that something of what I say might be inspirational. If I can encourage two or three in a class to want to do music in any form away from the classroom then I have achieved something,” he says.
It’s a typically modest claim for someone of Mick’s reputation in the music industry. Barnard Castle School’s director of music Simon Dearsley says: “I have worked with many fine heads of wind in my career but none of them combine Mick’s delightful enthusiasm with such a high standard of musical and technical prowess, and unparalleled professional experience. If you want to have a career as a professional saxophonist or clarinetist, Mick Donnelly is the very best teacher in the UK.”
Mick’s career as a musician may have taken him around the world with some of the biggest stars, but it is easy to see why teaching remains important to him. With no family background in music it was teachers who first encouraged him and set him on the road to success.

His beginnings in 1960s Hartlepool may have been humble, but for Mick it was very much the right place at the right time. “Our next door neighbour was a man called Billy Hand and he was musical director of the Black and White Minstrels Show, which was huge at the time. I remember sitting on his knee at the piano and watching his hands on the keyboard. There was no other musician in my family and we think that’s where it was born into me.”
At primary school he was introduced to the recorder by George Robinson and at secondary school another professional musician, Russ Nicholson, put a saxophone in his hand. They took him to see artists like Tony Bennet, the Stylistics and the Three Degrees, who he ended up playing with later.
They guided and mentored him but had to compete with his talent and love of football. Eventually Mick had to make a choice between sport and music – and chose music. He applied and got a place at Leeds College of Music and although he didn’t qualify for a grant, neither could his family afford for him to go. To this day he has had no formal music training.
“My dad was a plumber and wanted me to do my apprenticeship. It wasn’t a problem because no-one became a professional musician at 16 and, although I got the bug from seeing the stars play, I never thought I’d be good enough. I planned to get a trade then think about music when I was 20.”
His talent accelerated his plans, however, when, in the third year of his apprenticeship, following a recommendation from George and Russ, he was asked to audition for the cruise line Cunard. He got the gig and headed off to New York to catch the QE2.
After that, Mick chose to base himself in London and joined a band called Hollywood UK with Simon Gardner, now lead trumpet player in the Strictly Come Dancing Band. Their breakthrough came, ironically, back in the North East when Ian Dury was due to play on The Tube TV show in Newcastle.

“The guys who’d played on Ian’s album couldn’t do the show so my friend was asked if he knew a sax player. Once I got that exposure there were a lot of spin-offs. I tell students there’s a lot of luck involved and knowing the right people as well as being able to put yourself in a position where your talent can be seen,” says Mick.
From there he joined bands with former members of The Skids, and Glen Matlock, the bass guitarist in The Sex Pistols. In 1984 he joined the post-punk band Spear of Destiny, recording three top 25 albums over the next five years; he still retains a ten per cent share in earnings.
With a manager, his career supporting UK and international artists in the UK and overseas took off, from Madness to Barry White, Sammy Davis Jnr to Gene Pitney, Desmond Decker to Ben E King and Boney M. He moved to Monte Carlo for two years as part of the ten-piece band at the famous Cafe de Paris and supported Whitney Houston in concert.
Mick appeared on Top of the Pops in the 80s with Imagination, Boy Meets Girl and Princess. He played for Britney Spears on TV and at the Belgium Grammy Awards, and has played with Sting, The Bee Gees, Ronan Keating, Lulu, Shirley Bassey, Dexy’s Midnight Runners and Robbie Williams.
The one artist he always wanted to work with was Lisa Stansfield and has played on all her TV, live and recording work for the last three years, including playing on her latest album due out this summer.

“She’s wonderful to work with. All the musicians she has around her are seasoned, talented professionals who just enjoy playing quality music,” he says.
As for where the talent comes from, Mick says: “I’m not a big believer in natural talent. If you’ve got that then you have a platform to be good at anything, especially music.
“These days you have to be really good. The financial climate has even affected our industry in sorting the wheat from the chaff and the quality now is very, very high. When you think there are only 30,000 people in the musicians’ union, from amateur to professional, it’s a very exclusive club.”
Having found time to take a teaching degree and become a Fellow of the London College of Music, he only does higher profile performing now, often passing on other work to former students.
“The school have been extremely supportive and have always allowed me to combine my professional playing with teaching,” he says,
Most recently he has established the Mick Donnelly Academy of Music in Hartlepool.

He says: “State schools can’t give the support to music students now so we offer low cost, high quality tuition, performance opportunities and instrument sales and hire. We only have professional musicians and teachers who bring knowledge and genuine experience of the music industry. I was lucky in who I came into contact with. Now we just want to give something back.”
* Mick and his All Stars Quartet are playing in concert, together with the Barney Jazz Cafe and windband, at Barnard Castle School on Thursday, March 16 at 6.30pm. Tickets cost £15 to include supper and there is the option to wear 1920s dress. Contact the school office for tickets on 01833 690222.