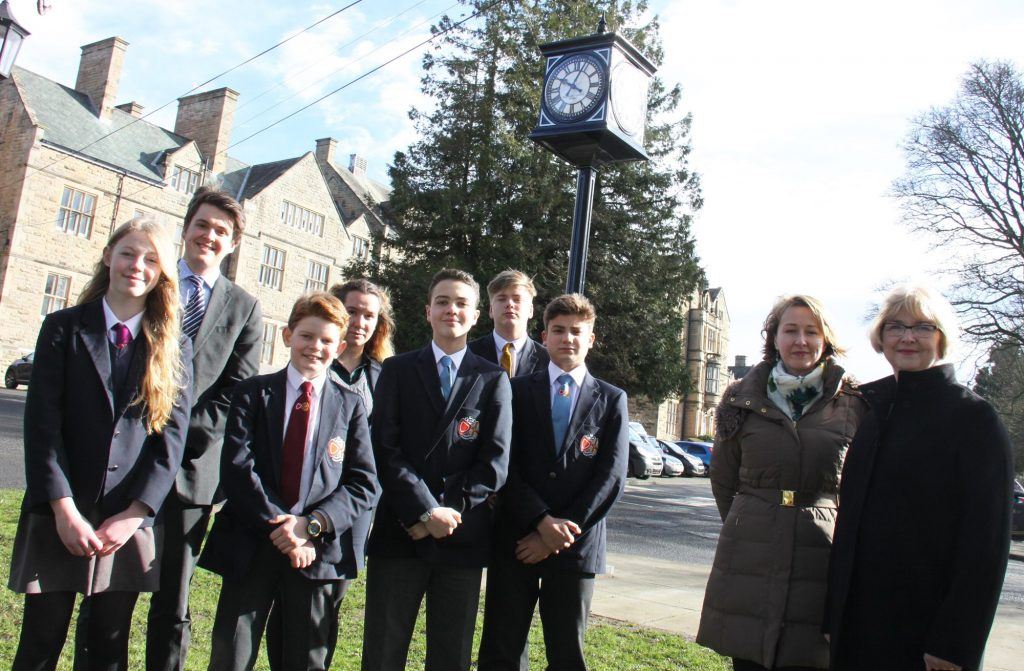 THERE is no excuse for being late for class now that Barnard Castle School has taken delivery of a spectacular new timepiece.
The five metre-high pillar clock stands at the top of the drive to school and is visible to all pupils and staff as they arrive.
The illuminated clock, which bears the school name on its four 610mm faces, was ordered and purchased by Barney Friends, the school’s social group for parents, following a request by the School Council, and installed by the school’s facilities team.

Head boy Alex Booth explained: “The School Council first came up with the idea three years ago when they were thinking of something distinctive they could do for the school that would be of most benefit to everyone.”
The idea was passed to Barney Friends who raised the £11,000 needed to buy and install the clock – the equivalent of 4,400 bacon sandwiches sold at school events.
Chairman Margaret Alderdice explained: “Our principal focus is to be a social group for parents and part of that is to provide refreshments at events like sports days, the Tait Tens rugby tournament and our Michaelmas Fairs. When we do manage to generate funds, we use them to support local charities and to buy things the school would like.”
Barney Friends member Christine Hick researched British manufacturers of clocks, ultimately choosing Hampshire-based Good Directions, who manufactured it in cast aluminium.
The four skeleton clock faces are all linked to one controller that restarts the clocks after any power failures and is pre-programmed to alter the clocks at the summer and winter time changes for the next 20 years.

Christine added: “It was important to us that the clock was made in Britain and this particular company has a very good pedigree having been commissioned to make a clock for the London 2012 Olympic Park, a miniature Big Ben for a London-themed signature room at Harrods and various town clocks.”
When it became clear that the clock would be ready in 2016, the 100th anniversary year of the beginning of the Battle of the Somme which the school commemorated in a number of ways, it was decided that it should be dedicated to all the boys, masters and Old Barnardians who gave their lives in the Great War.
Headmaster Alan Stevens said: “Almost all of the money which paid for the clock was produced by a small number of parents of children at the school who worked tirelessly and in some horrendous Barney weather by selling refreshments at sports tournaments and by organising the fantastic Michaelmas Market each November.
“Many thousands of mugs of tea and bacon butties later, the clock was commissioned and, although its design blends perfectly with the school’s Victorian lamp-posts, it is clearly visible from anywhere in front of the school building, even in the dark thanks to its illuminated dial. It is very impressive and has surpassed all expectations.”
Oliver Appleyard, one of the youngest members of School Council, added: “I really like it, especially because it has four faces so you can see the time from every angle.”