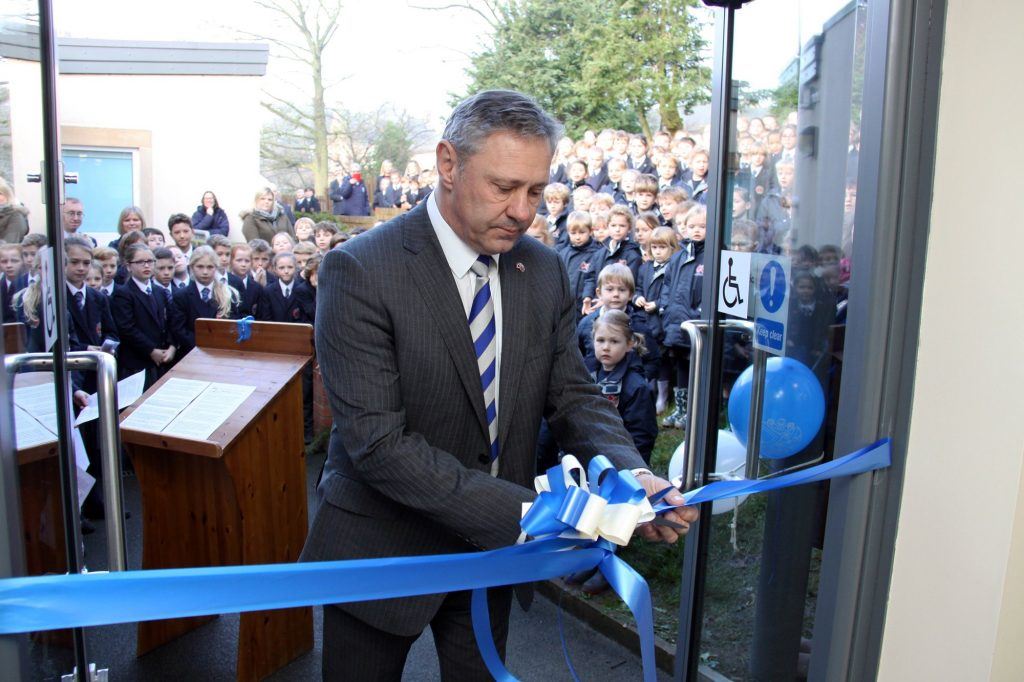 Barnard Castle Preparatory School’s longest serving teacher was given the honour of officially naming and opening a major new extension for learning to mark both his and the school’s centenary.
Deputy head and Year 6 teacher Nick Seddon has just completed his 100th term as the final touches were put to the new facilities, which were started in the 100th anniversary year of the school.
The Centenary Building comprises a dedicated science laboratory, two Year 6 classrooms, a quiet area and storage for pupils’ belongings. The finishing touches to a science garden this term completed the new developments, which also include an astro-turf pitch.
Prep School headmistress Laura Turner said: “The Centenary Building’s new classrooms provide wonderful, nurturing atmospheres for our older children, whilst the science lab and garden are providing amazing, inquisitive experiences for all our children, from Reception to Year 6.
“We have learned to use the new facilities wisely and creatively, which has allowed us to expand and grow our learning further. If, every day, the children leave school happy and having learned something new, then we, as teachers utilizing these facilities, have done what we love doing best, opening doors for the children to grow and flourish further.”
Watched by all the pupils and staff of Prep School and Barnard Castle School headmaster Alan Stevens, pupils Harry Maude, Katie Riddell, Fin McGuire and Poppy Barlow spoke about the new facilities.
Harry said: “It’s fantastic. I remember when I was in Reception gazing in awe at the old classrooms. Seven years ago I could not have imagined the buildings we have now. We should all consider ourselves very lucky.”
Katie added: “It’s a relaxing place at break-time when you can sit down and read a newspaper or a book. The difference from when I started school is outstanding. I absolutely love it.”
Mr Seddon arrived at the school in 1983 when some of the current children’s fathers were pupils.
“There were only three classrooms, three teachers and around 60 children. By the centenary, we had 14 classes, 200 children and more than 20 teachers,” he recalled.
“We are so lucky to have the beautiful Victorian building, Westwick Lodge, at the heart of the school but also to have these extra rooms and the Senior School facilities, which we use every day.”
Before performing the official opening by cutting a ribbon and unveiling a plaque, Mr Seddon added: “I am very proud to have completed 100 terms as the Prep School’s longest serving teacher; to see the school grow and develop is very special.”