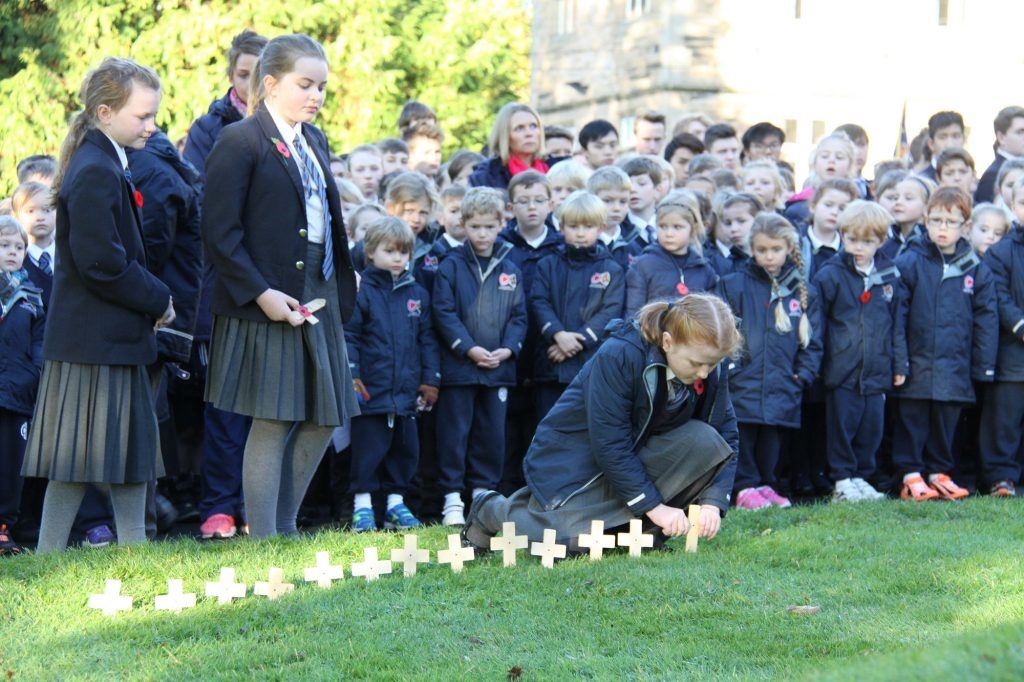 School gathers to remember the fallen

Barnard Castle School has honoured those who made the ultimate sacrifice at an annual Act of Remembrance and parade.
Crosses were planted by pupils and staff in the ceremony that remembered those connected with the school who have fallen in war.
Among them were the 145 boys and five staff killed in the First World War, particularly remembered this year since it marks the 100th anniversary of the Battle of the Somme.
Headmaster Alan Stevens said: “One hundred years after the Battle of the Somme, which alone cost the lives of nearly one million men from all the nations involved, it is sobering to consider that Barnard Castle School suffered from one of the heaviest rates of attrition during World War I with almost 1 in 4 of its sons never returning. The average age of those who died from the school was just 20.”
Each November all current pupils and staff gather in front of the school for the remembrance ceremony and parade by the school’s Combined Cadet Force (CCF).
Pupils, from the youngest in the Preparatory School to Sixth Formers, planted a cross to remember each of the fallen as head boy Alex Booth and head girl Salma Ali read out the names of all those killed in the First and Second World Wars and the Falklands campaign.
Prayers were given by the school chaplain Father Darren Moore and wreaths were laid by Laura Turner, headmistress of the Preparatory School, and Michael Truss, director of studies.
Mr Stevens added: “We rightly reflect particularly on those from our school who gave their lives in the service of their country. It reinforces the importance of internationalism and the value of cultural understanding; not for the first time, the fellowship that our girls and boys enjoy in this community, regardless of nation or creed, can only be positive for the future of their generation.”
The school’s CCF will take part in the Barnard Castle Remembrance Day Parade on Sunday followed by a service in the school chapel and a civic ceremony at the town war memorial in the grounds of Bowes Museum.
Those who gave their lives are remembered within the chapel’s most prominent features – the panelling, pews and the great east window are all memorials to the boys and old boys who were lost.
Barnard Castle School has also traditionally been the choice of military families from all the armed forces and their sons and daughters, who board at the school, were among those planting crosses. Pupils also have the chance to visit battlefield sites in France to learn and to pay their respects.
More pictures at https://www.facebook.com/BarnardCastleSchool