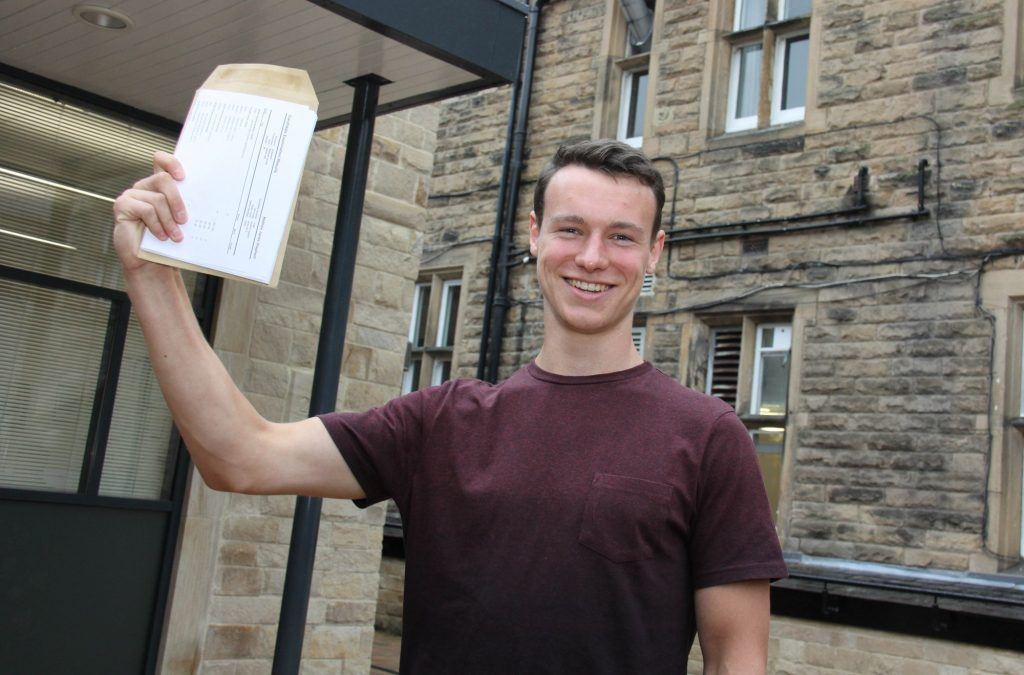 A PUPIL who broke his wrist as his GCSEs began and another whose old school closed mid-way through his exams were supported towards top grades in today’s GCSEs.
Tom Harris, a boarder at Barnard Castle School, broke his right elbow just after his exams started and had to rely on senior school managers to scribe for him.
The son of an RAF pilot who is working with the South African Air Force in South Africa, Tom, who comes from Thirn, near Bedale, in North Yorkshire, achieved six A*s, two As and two Bs.
Speaking from Limpopo state after receiving his results while on holiday, Tom said: “I’m very happy and really shocked at my results. I didn’t know what to expect.
“I broke my elbow playing rugby after I’d taken just three exams. I had surgery, then had to go straight into a biology exam the next day. I took the rest of my exams in a separate room on my own and dictated my answers. It was a bit different but I got used to have a few exams.”
Tom was supported by his house master Andy Allman, head of sixth form Chris Butler, director of studies Michael Truss and former second master Dan Gorman, and was allowed 25% more time for each exam.
Mr Allman said: “Tom has done very well. Some of his subjects like RE required him to spell out Arabic words in his dictation so it was a difficult way to get through his exams. He coped very well.”
Tom’s mum Teresa paid tribute to the school matron, an aunt, her friend Jo Living, from Bedale, and the school for their support through his injury and exams, and to Mrs Houghton for contacting the exam boarding and arranging the scribing.
“He had been at Barnard Castle School since Year 7 and I knew he would get a lot of support. The children are very resourceful and he was comfortable with the teachers who scribed for him, and we had a lot of support from family and friends,” she said.
Matthew Shepherd, who along with a number of other pupils moved to Barnard Castle half-way through GCSEs after his previous school, St Bees in Cumbria, closed last summer, achieved four A*s, five As and one B.
Matthew, of Cockermouth, Cumbria, who was also boarding for the first time, said: “Year 11 is short year anyway and a lot of the exam boards were different here so I really had to do two years in one. While there was some overlap between subjects a lot of things changed as well.
“As long as I concentrated and was aware of what work I needed to do it was fine. It was a massive shock when they announced St Bees was closing but I came to Barney for a taster day and liked it. I play rugby and came for pre-season training last summer so got to know a few people then.
“Boarding has been good because there’s always something going on and you do everything with your friends. I’m staying here for Sixth Form now and taking A levels in maths, physics, chemistry and Spanish.”
The boys’ results were among Barnard Castle School’s best GCSEs since 2013. Within the 99.4% pass rate, nearly half of all grades were A* or A.
The top student was talented singer Nicholas McKay, who has been selected to join the Samling Academy, which is developing the next generation of classical singers in the North East. Nicholas, of Barnard Castle, who has been at the school since Year 7, achieved ten A*s and an A and is staying on in the Sixth Form. James Terrill followed closely with ten A*s.
Nicholas is one of a number of musicians who combined musical talent with studying:
Michael Liu: four A*s and seven As
Nathan Barker: seven A*s and four As
Tom Harris: six A*s, two As and two Bs
Ceara Sutton-Jones: three A*s, five As and two Bs
Jamie Spratt: two A*s, seven As and a B.
Nathan, of Darlington, who is also taking grade eight in violin and grade seven in French horn, said: “It’s what I hoped for. I’m staying to do history, music and English language at A level, and hoping to go on to a music conservatoire.”
Ceara’s mum Inyoung, of Langton, near Darlington, said: “This has been a great foundation for her education. She has been coming here for six years and we are so proud and grateful for her education here. The pastoral care is outstanding and the teachers are marvellous.”
Together with Nicholas, Nathan and James, seven other pupils received straight A*/A grades:
Rohan Kelsall: nine A*s and one A
Ross Gardiner: eight A*s and two As
Alexandra Thompson: eight A*s and two As
Sophie Hopkins: seven A*s and three As
Michael Liu: four A*s and seven As
Rachel Elphick: three A*s and seven As.
Rohan was congratulated first by his older brother Ethan, who has just completed his first year studying medicine at Manchester University following A levels at Barnard Castle.
Headmaster Alan Stevens said: “This is a great set of results and we are delighted for all our students and their teachers who have worked so hard.
“We are especially pleased with our added value – the amount by which candidates exceeded their target grades – was extremely positive with most adding an average of between one and two grades to independently benchmarked expectations.”