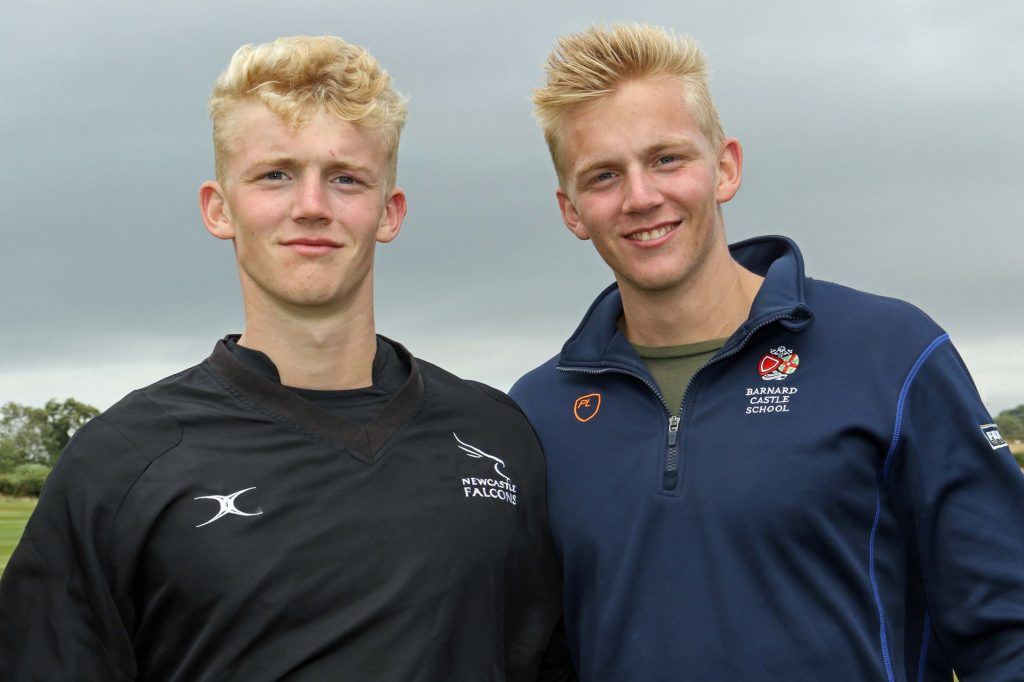 Aches and brains for high-achieving brothers

RUGBY brothers Jamie and Sam Adamson showed their mettle after tackling their exams with fractures sustained pursuing their passion for sport.
Barnard Castle School’s outgoing head boy, Sam completed a succession of A Level written papers unaware that he had a clean break in his wrist that will now require surgery.
At the same time his brother Jamie was sitting his GCSEs with stress fractures to his spine, a hazard of the sport for an elite athlete who plays for the England and Falcons academies.
Despite the physical setbacks, both brothers, of Hunwick, County Durham, proved to be brains and brawn as they secured top results at A Level and GCSE.
County player Sam, 18, gained  A*s in chemistry, maths, further maths and a prestigious and rare Distinction Level 1 in physics. He will now read natural sciences at Durham University, where he plans to continue his rugby.
“I’d played in a tournament and don’t even remember hurting my wrist,” said Sam, who plays second or back row and was vice captain for the school’s first XV.
“It was hurting, particularly in some of the longer exams and was getting worse. A scan revealed a clean break in the scaphoid bone which will need surgery.”
Jamie, 16, will collect his GCSE results next week but has already secured his iGCSEs securing three A*s and an A. He plans to stay on at Barnard Castle School to take A levels and make the most of the newly opened dedicated sixth form centre.
As well as playing flanker for school, he is also a member of the Falcons Academy and the England Academy, which develops the next generation of elite players.
“I was diagnosed with stress fractures in my L5 and L4 vertebrae and had to spend several months recovering,” said Jamie, who would love to play rugby professionally, particularly Sevens.
“I’m all right now as long as I take care to warm up properly but I love rugby so it is definitely worth it.”
Barnard Castle School achieved an overall pass rate of 98 percent, the second highest A2 results for seven years.
Headmaster Alan Stevens said: “Both boys are incredible role models because they involve themselves in so many aspects of school life.
“Their achievements in the classroom and on the pitch inspire those around them and the fact that they have achieved so much academically, while flourishing in elite sport despite their injuries, shows how dedicated and committed they are as young people.”