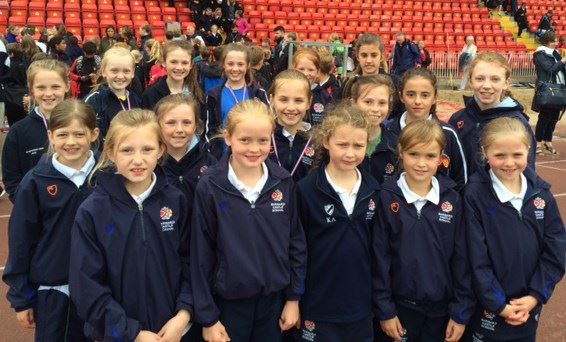 A TEAM of young athletes have proven they are among the best in the region after running away with a major title for the second year in a row.
U9, U10 and U11 girls from Barnard Castle Preparatory School retained the overall HMC Athletics Championship title at Gateshead International Stadium against some of the best athletes in the North.
Fourteen independent schools from as far away as Hull and Sheffield competed at the event.
Barnard Castle’s squad of 35 included boys and girls in the three age groups.
Evie Hole-Todd, 11, of Gainford, did the double taking the U11 200m title to add to the U10 title she won last year.
Evie said: “I felt under quite a lot of pressure because there were so many people watching. It’s quite nerve-wracking on the start-line but you just have to focus on finishing.
“I didn’t think I would win this year because training the day before hadn’t gone very well so I was really pleased.”
Evie’s contribution as anchor saw her and teammates Eve Pepper, Sophia Baker and Jessica Dixon, take the U11 relay title. Sophia also gained a second place in the U11 800m.
In the U10s, Molly Peart won the girls’ long jump, while William Hutchinson was second in the U9 high jump.
Coach and deputy headmaster at Barnard Castle Preparatory School Nick Seddon said: “The HMC Championship is a fantastic opportunity for our children to experience competing at an international standard stadium and once again they rose to the occasion.
“Our Year 6 girls led the way, continuing where they left off last year, and it was great to see their training pay off.
“There were many other fine performances during the afternoon with lots of the athletes reaching finals and achieving personal bests. The support the children gave each other, regardless of whether or not they won, was tremendous to see.”