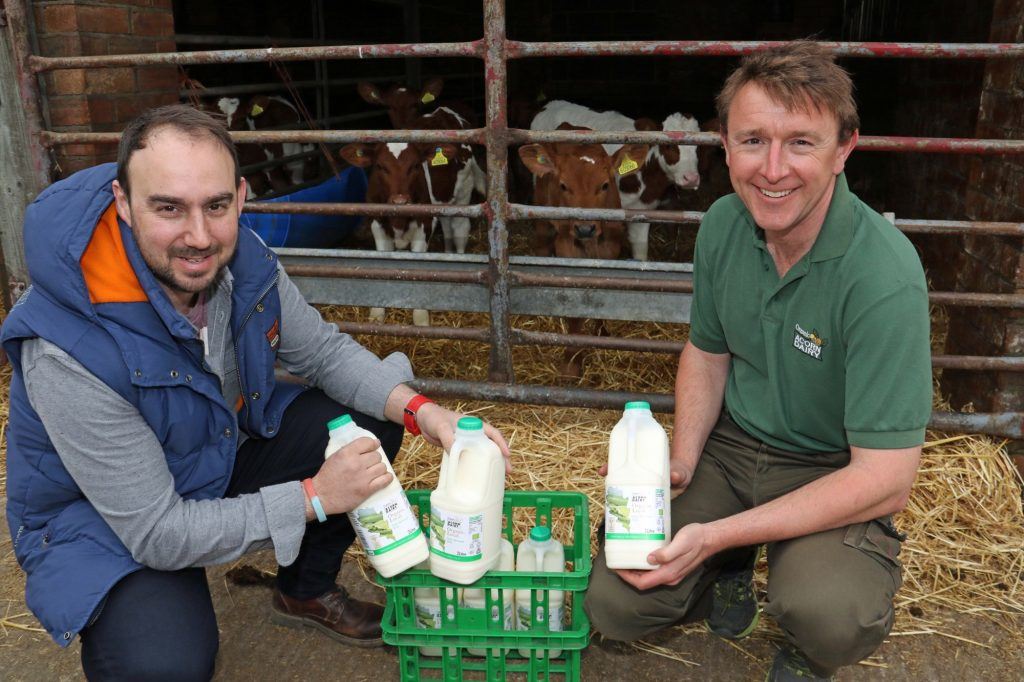 Catering manager goes to the source of school milk

A CATERING expert charged with feeding a school renowned for its sporting prowess has been learning about the benefits of going organic.
Newly appointed catering manager at Barnard Castle School Marcus Baker was invited to Acorn Dairy to see how organic methods benefit animals, children and the environment.
Research by Newcastle University has shown that Acorn Dairy’s milk contains higher levels of omega 3 and anti-oxidants, ideal for developing young minds and bodies.
Drinking milk has also been proved to aid muscle recovery, a boon for a school that has a history of producing top sportsmen including premiership and international rugby players, long distance runners, cricketers, netball players and athletes.
Acorn Dairy cows also benefit from reduced use of antibiotics which can enter the food chain making them less effective in humans.
Barnard Castle School’s 700 students manage to consume around 1,100 pints of organic milk a week with half drunk and the rest used in food at breakfast, lunch, dinner and snacks for day and boarding students.
Acorn Dairy director and Old Barnardian Graham Tweddle gave Mr Baker the grand tour of the farm at Archdeacon Newton, near Darlington.
Mr Baker, of Newton Aycliffe, said: “We serve milkshakes and biscuits as a dessert and the students love it. Acorn’s milk certainly tastes much nicer than the generic product.
“This is the first time I have visited the dairy and it has been great to see the whole process from cow to bottle. The animal welfare is very impressive and we really value local suppliers.”
Mr Tweddle explained how the cows benefited from being fed grass, clover and silage rather than concentrates. They were also put under less pressure to produce more milk with each cow providing 6,000 litres a year compared to the traditional 12,000 litres associated with large-scale farming.
On the issue of antibiotics he added: “It is far better to keep the cows in a way that reduces the chances of them becoming ill in the first place. If we do have to use antibiotics, then we take them out of milking for three times longer than other dairies so they don’t pass them into the milk.”
On animal welfare he explained that the more energy you put into a cow the quicker their hooves grow and the softer they are. “Soft hooves on concrete leads to foot problems which end the cow’s productive life,” he said.
By contrast Acorn’s herd is to get new cowsheds that are 40 per cent larger than normal, feature footbaths, automatics hairbrushes and memory foam mattresses.