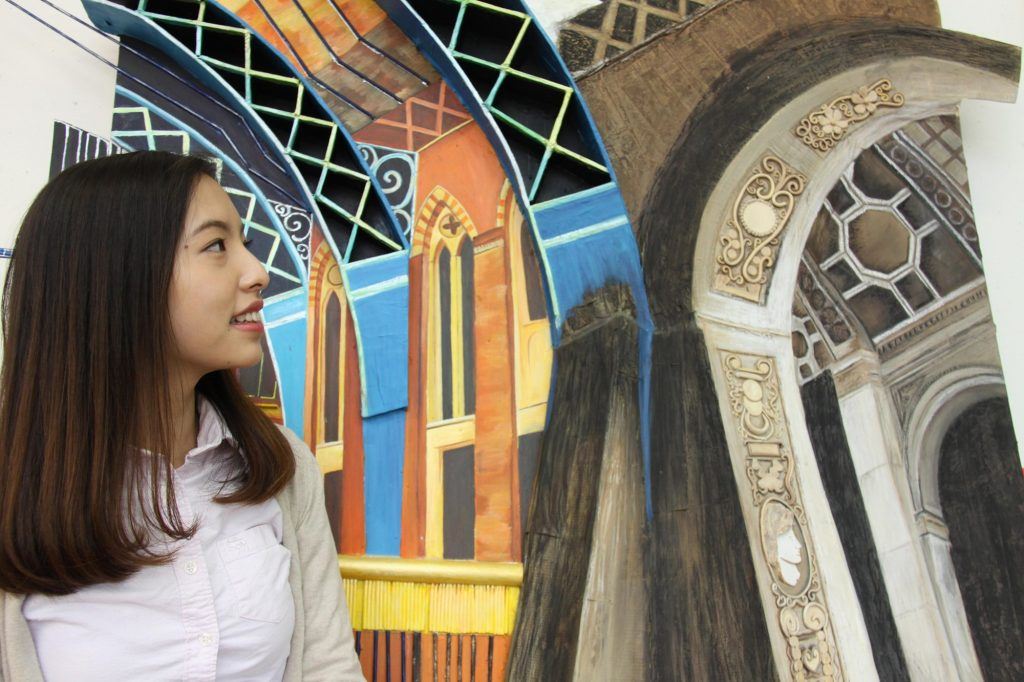 Work by talented student artists has gone on display in an exhibition which marks the culmination of two years of study and practice.
The new Sixth Form Centre at Barnard Castle School was the venue for the exhibition by four Cambridge Pre-U art pupils, who leave the school this summer to embark on university courses leading to careers in design.
The collection of exhibits incorporated a range of styles, materials, from plastic to video and clay to cotton, and techniques including soaking fabric in vinegar and dipping bed sheets in plaster.
Work by Iskren Ivanov, 17, has already caught the eye of tutors at the prestigious Glasgow School of Art, who offered him an unconditional place to read architecture after seeing his pieces, which he took to the interview in a cardboard box.
Iskren, who comes from Bulgaria, only joined Barnard Castle School as a boarder last September after a year at St Bees, in Cumbria, which closed last summer, and has completed his course alongside A levels in physics and mathematics.
“Everyone else had their work in a portfolio for the interview but because a lot of mine is 3D I had to put it in a box. I was inspired by the architecture of Daniel Libeskind because I like unusual, dynamic shapes and that’s what I created in clay for my final piece,” he explained.
Tom Hunter, 18, of Newsham, North Yorkshire, is also aiming to study architecture, at Northumbria University.
“We were allowed any starting point and I took inspiration from where we live, in particular the power, movement and erosion caused by water,” he explained.
Tom’s final piece was a large 3D sculpture inspired by High Force which incorporated distorted, painted cardboard tubes to reflect the geology and torn bed sheets, dipped in plaster and allowed to harden.
Belle Soo, 19, who comes from Hong Kong and has been a boarder for seven years, was inspired by buildings in London, recreating them in silk thread pictures trapped in laser-cut acrylic to create a 3D display. Her final piece was a striking 3D painting reflecting modern and classical architecture and incorporating clay, mirrors and paper straws.
Belle, who is also taking A levels in psychology and ICT, is hoping to study fine art at Reading University.
Emily Cody, 19, of Arkengarthdale, in North Yorkshire, took the brave step of returning to school after a first round of A levels in history, English language and ethics and philosophy last year and starting a degree in sociology to pursue her real love of art and fashion.
After completing her Cambridge Pre-U in just six months, she explained: “One of my flat-mates at university was doing fashion and I found I was spending more time looking at her work and helping her than I was working on my own course.
“Fashion is what I really want to do. I’m especially interested in the business side so I’m hoping to go to Northumbria to do fashion marketing.”
This is the first year sixth formers studying art at Barnard Castle School have followed the Cambridge Pre-U qualification.
Head of art Kate Baptist explained: “The course is designed by art educators, is more specialist and is highly regarded in academic circles because it encourages a more university-style way of working.
“It allows for greater focus on developing pupils’ practice and a personal identity within their work. They have to produce an experimental portfolio and a project which is driven towards a personal, final piece.
“All the pupils’ work shows very well. They’re rightly proud of it and it feeds directly into their future courses and career choices.”